Crazy, brave lad, professional nutter, ‘that man from the TV?’ 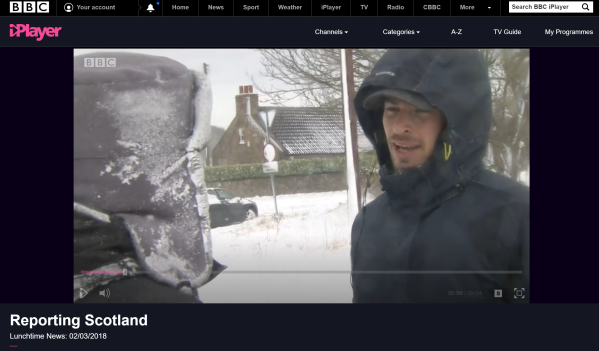 Just a few of the things people have called me the past days. People give each other names all the time and that’s great. Makes you put things in perspective, how others look at your actions. It’s an opportunity to learn.

Heavy weather had hit Scotland and the rest of the UK. Red and Amber alerts were issued and I was sitting right in the middle of all that, in Del Dewar’s guestroom.
It had been snowing off and on for the past few days and left the whole country crippled. Especially the train network was impacted. Unless I made my way more South, I might be stuck there for quite some time…

A picture taken moments before encountering the reporters.

Starting off in the Snow

Apart from feeling restless about the weather, I did set out to go on a bike adventure so there was no way I was going to stop at the first challenge. North to South. I wanted to be moving. I didn’t want to impose on Del and his family any longer, even though I was welcome to. I wanted to taste the snow and conquer the cold. Be Braveheart.

I decided to take my chances.

Down a hill in Dunfermline, a BBC reporter was filming a car that was blocking the road as it was absorbed by a mound of snow. His attention shifted as he spotted me trying to circumvent the blockage through a snowbank. Later on I appeared in the lunch and late evening news. They even gave me a separate webpage:
http://www.bbc.co.uk/news/av/uk-scotland-43256847/meet-the-man-trying-to-cycle-from-scotland-to-brighton

It feels like they’re mocking me, the music certainly alludes to it. Though I can see reasons why they’d frame this in a dis-encouraging way. Wouldn’t want any Scots to take an example. But here’s an explanation why my journey wasn’t all nuts.

The Thin Line Between Crazy and Brave

People sometimes do the unexpected. The ‘out of the ordinary’, the misuse and abuse cases. Why? There’s many different possible reasons. Mine was a sense of purpose and a thirst for adventure. I took to the road with a good idea of what I was going to find. I know most of the risks and planned for them.

Because that’s what testers do.

We plan, plot, prepare and train to deal with shitty situation when they’re presented to us. It’s what we face multiple times on a daily basis.
I have been training for years, testing out my gear thoroughly, buying equipment that will help me get through the direst of situations.
I came prepared. That’s what makes the difference.

Sailing across the Forth rd bridge, by means of grabbing my coat, pulling it backwards and have the wind carry me forward, I found a Scotsman telling me “You’re a brave lad, I’ll give you that.” A few miles further, a Polish cyclist and me joined our way to Edinburgh hoping to find a running train. When none were available, we split ways. I cycled onward to Biggar, he stayed in Edinburg. From Biggar I made my way to Carlisle then Penrith. On the bus an elderly man recognised me ‘Are you that man from TV?’. We had a pleasant talk about Neil Armstrong and Lake District cake.

The nice thing about travelling by bike is that people immediately see you’re travelling and start talking to you. It gives plenty of opportunities to view the world through different eyes.

I arrived in Penrith when a train had yet to leave South from Glasgow. For me it’s a personal triumph. A triumph of perseverance over common perception.

A must see for cyclists here in the UK. I’ll definitely return when it’s warmer and more sunny, though the foggy hills gave an exuberant feel to the journey.

Lakes, hills, cyclists. Why use words when pictures can describe it better? 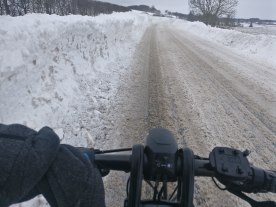 Am I cold? Sure.
Do I get tired? That’s part of it.
Am I having wonderful views? Absolutely.
How do I feel? Alive.