It’s cold. Damn cold. I keep telling myself that if you’re suffering a bit, you’ll appreciate warmth, a good meal and friendly people even more. But how much abuse is the right amount?
It’s ‘the beast from the East’, also known as Russia’s cold wind, vs. the beast from the South, also known as me. It’s a fight I’m pretty sure I won’t win, but I’ll settle for survival. I’m equipped with a folding bike and four bags containing all I need.
At the end of it all, there’s a treasure worth ploughing through the snow for… 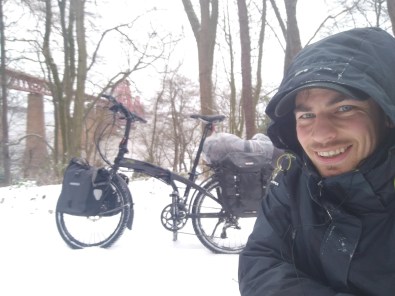 The reward to be found at the end of this trip, will be in the warm arms of my tester friends as we hug, drink, laugh and inspire each other to become better at whatever we do. I say whatever, because I keep being astonished how we’re still so inherently different, value other things and pay attention to varying topics, yet somehow feel connected through our passion for quality & testing. If there’s something I’ll be keeping my eyes open for on my adventures, it’d be these wonderful moments of finding the unexpected, different views on the same thing. Test the world, as you will.

My cycle down will not be uneventful. RiskStorming in Edinburgh (though cancelled),

RiskStorming in Cambridge and a workshop in Brighton. There’s a Grumpy Tester, Del Dewar, waiting for me in Edinburgh who’s opened his home to me.
I keep being amazed how supporting and caring the Testing Community is. I struggle to phrase exactly how much I appreciate it. That’s why I support Ministry of Testing in all their ventures. They make this happen.

The plan is to cycle North-West to a Scottish national park called Loch Lomond & the Trossachs to reach Glasgow. Take the train from Glasgow to Carlisle and cycle through Lake District to Manchester.
From there I’ll cross Peak District to end up in Nottingham, then Cambridge, London, Brighton.

Don’t know where I’ll sleep for most of the times, don’t know which route I’ll take, but I’ll manage and I’ll enjoy. One thing you can count on is the resourcefulness of a human being.
Yesterday I had a lovely ride from the airport to Del’s. Crossed a windy bridge and icy forest-y roads.