We had just enjoyed a great night of RiskStorming in Cambridge, some pizza, beer and the company of  a nice group of expert testers trying to solve the same problem at the same time.
The workshop went rather well. I figured I wanted to try out something new this time and focus the RiskStorming format on a sprint-level change. Instead of focusing on a specific application, we looked at a new feature that would be added to an existing app already.
This is something more lifelike. You’re in a sprint, a new feature is proposed and you’re asked to come up with a plan to test for it. Turns out RiskStorming deals pretty well with this refocus as well.

We ended up in the pub afterwards and that’s where my toothache hit me hard.

Long story short: I was crippled by throbbing pain for 2 days. The first one I spent in Karo’s spare bedroom, the second on my bike to London.

The pain was thundering like a drum inside my head and I was pedaling to the beat. 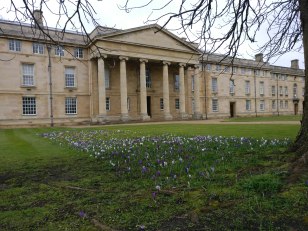 To London! I don’t care if I haven’t prepared a thing! I NEED TO GET RID OF THIS PAIN!
Not having a plan is normally not a problem if you go anywhere else but London.

This time, it got me into a halfway house… I think.
Riding in London with a big, packed bike is dangerous. More dangerous than the snow-covered Scotland I had just left behind.
Looking for a place to stay in full youth hostels gets you laughed at, apparently. Until I met one guy who’d ‘do me a favour’. He took my money and sent me to a house down the street, which is supposed to be part of the youth hostel. It wasn’t listed on Google maps, I wasn’t able to find a website or anything but the front door.

People seemed nice, but didn’t talk to me and looked, sounded and smelled as if they’ve been living there for some months now.
After barely sleeping, I left at 7 in the morning. It’s also where my teeth started swelling.

Taking the train from London to Sevenoaks, because I prefer hills, forest and nature over big buses, traffic lights and fumes. From there I cycled through a beautiful piece of the UK. I quite loved both the North and the South. The middle, except for Lake District, isn’t very exciting to say the least.

As by chance I visited the coffee and gift shop that was home to one of my very favourite heroes: Winnie the Pooh! On this empty plate was an waffely, vanilla iced goo topped off with Maple syrup.

A final AirBnb in the forest, felt like home and had a nice warm bath for me.

My tooth didn’t hurt anymore, the days were spent in the forest and up-and-down hills. Rather uneventful, but damn beautiful.

During my journey I’ve had some bad luck. But I was able to cope with it. The most important part is that I learned and learn I did. Putting things in perspective and looking at exactly what changed for me is for the next coming weeks.

Thank you for following my pilgrimage, if you’re at Brighton, let’s have a talk!