TestBash is the Mecca for testers around the world.
I have been wanting to go for a long, long time. It’s got a ton of interesting, great people who are, on top of that, highly experienced and motivated testers!
Alas, this year, I wasn’t going to make it. Weeping, I looked forward to the twitterstorm that would leave me somewhat involved and envious of the people who were able to attend.

Completely by surprise, the news of me being able to go to TestBash2016 swept me off my feet: unprepared and unplanned a spot just opened up for me.
I have Steve Green from TestPartners (London) to thank. A colleague of his wasn’t able to make it and Steve decided to bestow the ticket to a tester he deemed worthy.
I got lucky, as I was apparently the only tester available who could clear his schedule.
A free test bash ticket and a hotel to spend the night were mine to enjoy.

By the time I drove to Brighton, I knew more about Test Bash than I needed but much, much less than I wanted to.
That evening, I wandered the streets of Brighton in search of testers who I’d recognize from Twitter and/or Slack profile pictures or tried to pick up flashes of test-speak.
Needless to say, that tactic wasn’t too successful.

After some frantic twittering and emailing, I finally got the coordinates to some covert, next-to-the-beach pub that had an open bar, about 200 testers and plenty of discussions ranging from forehead-tattoos and the most funny bug people had uncovered.
I got drawn right in. It felt like homecoming. Everywhere I looked I saw faces of people whom I’d chatted with, read blogposts from, had reached out to and had shared ideas with.
It was like seeing your family again, after being abroad for way too long.

I was there for about two beers time and met so many people I wanted to compliment and thank for the impact they’ve had on me as a tester.
Rosie, Richard, Vernon and Huib were the first to greet me. They introduced me to several other new people I had already met, but hadn’t recognized.

Anna Baik, I wanted to thank for her involvement on the Tester Slack group and her guarding of the integrity of the community on that channel, even if it’s easier to disregard people who ask the wrong questions. So I did. And I hope it sounded much more earnest in person than it would do over twitter or chat.

Helena Jeret-mäe, I thanked for helping me with creating a proposal for Let’s Test. Even though I didn’t make the cut that time, she told me what she appreciated about my effort, what could be better and on top of things, she gave me two more challenges. The first, I completed a day later: “Participate in the 99-second talks”.
Furthermore, she told me of her experiences and why she does what she does, further motivating me to make my own kind of music.

Eight hours later, I woke up to the sound of seagulls. Brighton! Right! pre-TestBash run, Let’s go!
Seven other crazy runners and me jogged along the Brighton coastline for a few miles and talked about each other’s Test work and sporting goals. 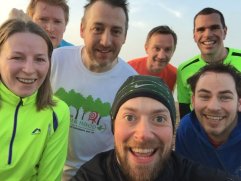 It’s a fun tradition that cleared my head and sharpened my mind for the whirlwind of a day to come.
Full English Breakfast, with capital letters, was enriched by getting to know my benefactor, Steve Green and his colleagues. If I ever consider working in London, his shop would be my place to go. During the course of a breakfast it became clear our ideas about testing are very aligned.
If you’re looking for a test gig in London and are tired of mindless testing and rigid processes, contact Steve. Really.

The conference had yet to start but my expectations were already met. I had met great people. Steve and all the people from the day before would have left me satisfied for a long time.
It had only been the beginning…

I made it a point to not linger too long with the same person, so as to not miss to many others. I was there to connect, thank, appreciate and get to know other testers  and set a foundation for later interactions.
I met a huge number of people whom I’m looking forward to get to know better. Time did not permit more than that.

Apart from the great interactions with incredible people there were of course, the conference talks.
Two of these really stood out for me. Katrina Clokie’s experience report of organizing pairwork in her company struck a chord with me. Not because she told us the advantages pairing bring, but because of her methodical way of organizing, iterating and improving upon it. Katrina is a big personality through her modesty and a huge asset to the testing community.

Bill Matthews’ talk had me shivering in my seat. He started with a fun, entertaining demo of not-so-smart, smart algorithms. Do you know the “Calculate my age from my picture” or “which dog is on this picture” algorithm? Played around with it?
Funny, right?
Well, imagine algorithms like that controlling your car or calculating what the maximum price you’re willing to pay for your train ticket fares would be. Imagine them influencing the way you think, buy, make decisions,… the way that marketing does.
Scary, huhn?
How would you test these algorithms and the effects the have?
It gave me the willies , I tell you.

Between talks I met another tester, who’s hometown I share. It was his first Testing Conference and it was clear that a whole world was opening up to him. I’ll be seeing more of him, I’m sure.

I could write many, many more stories about these very limited hours and I could elaborate on the ones here a whole deal more.
If you have read this far, you probably already got the message:

One thought on “TestBash Brighton 2016: Homecoming”